A. How do we evaluate visual disorders?

b. The Act also provides that an eye that has a visual field limitation such that the widest diameter of the visual field subtends an angle no greater than 20 degrees is considered as having a central visual acuity of 20/200 or less. (For visual field testing requirements, see 2.00A6.)

5. How do we measure best-corrected visual acuity?

e. Visual evoked response (VER) testing measures your response to visual events and can often detect dysfunction that is undetectable through other types of examinations. If you have an absent response to VER testing in your better eye, we will determine that your best-corrected central visual acuity is 20/200 or less in that eye and that your visual acuity loss satisfies the criterion in 2.02 when these test results are consistent with the other evidence in your case record. If you have a positive response to VER testing in an eye, we will not use that result to determine your best-corrected central visual acuity in that eye.

6. How do we measure visual fields?

(i) The test must use a white size III Goldmann stimulus and a 31.5 apostilb (asb) white background (or a 10 candela per square meter (cd/m2) white background). The stimuli test locations must be no more than 6 degrees apart horizontally or vertically. Measurements must be reported on standard charts and include a description of the size and intensity of the test stimulus.

(ii) We measure the extent of your visual field loss by determining the portion of the visual field in which you can see a white III4e stimulus. The “III” refers to the standard Goldmann test stimulus size III (4 mm2), and the “4e” refers to the standard Goldmann intensity filter (0 decibel (dB) attenuation, which allows presentation of the maximum luminance) used to determine the intensity of the stimulus.

A. When the maximum stimulus luminance (0 dB stimulus) on an acceptable perimeter is 10,000 asb, a 10 dB stimulus is equivalent to a 4e stimulus. Any point you see at 10 dB or greater is a seeing point.

B. When the maximum stimulus luminance (0 dB stimulus) on an acceptable perimeter is 4,000 asb, a 6 dB stimulus is equivalent to a 4e stimulus. Any point you see at 6 dB or greater is a seeing point.

C. When the maximum stimulus luminance (0 dB stimulus) on an acceptable perimeter is 1,000 asb, a 0 dB stimulus is equivalent to a 4e stimulus. Any point you see at 0 dB or greater is a seeing point.

c. Evaluation under 2.03A. To determine statutory blindness based on visual field loss in your better eye (2.03A), we need the results of a visual field test that measures the central 24 to 30 degrees of your visual field; that is, the area measuring 24 to 30 degrees from the point of fixation. Acceptable tests include the Humphrey Field Analyzer (HFA) 30-2, HFA 24-2, and Octopus 32.

f. Screening tests. We will not use the results of visual field screening tests, such as confrontation tests, tangent screen tests, or automated static screening tests, to determine that your impairment meets or medically equals a listing or to evaluate your residual functional capacity. We can consider normal results from visual field screening tests to determine whether your visual disorder is severe when these test results are consistent with the other evidence in your case record. (See §§404.1520(c), 404.1521, 416.920(c), and 416.921 of this chapter.) We will not consider normal test results to be consistent with the other evidence if the clinical findings indicate that your visual disorder has progressed to the point that it is likely to cause visual field loss, or you have a history of an operative procedure for retinal detachment.

h. Scotoma. A scotoma is a field defect or non-seeing area (also referred to as a “blind spot”) in the visual field surrounded by a normal field or seeing area. When we measure your visual field, we subtract the length of any scotoma, other than the normal blind spot, from the overall length of any diameter on which it falls.

7.How do we calculate visual efficiency?

a. General. Visual efficiency, a calculated value of your remaining visual function, is the combination of your visual acuity efficiency and your visual field efficiency expressed as a percentage. 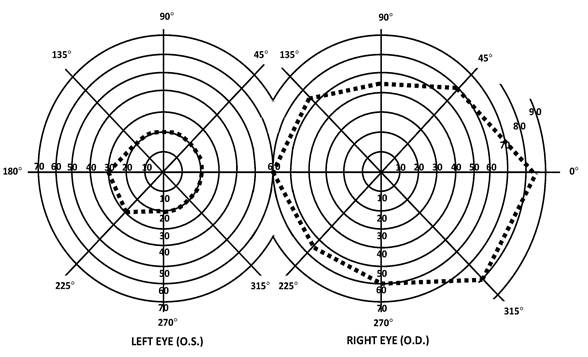 9. What are our requirements for an acceptable perimeter? We will use results from automated static threshold perimetry performed on a perimeter that:

a. Uses optical projection to generate the test stimuli.

b. Has an internal normative database for automatically comparing your performance with that of the general population.

c. Has a statistical analysis package that is able to calculate visual field indices, particularly MD.

B. How do we evaluate hearing loss?

1.What evidence do we need?

b. The otologic examination must be performed by a licensed physician (medical or osteopathic doctor) or audiologist. It must include your medical history, your description of how your hearing loss affects you, and the physician’s or audiologist’s description of the appearance of the external ears (pinnae and external ear canals), evaluation of the tympanic membranes, and assessment of any middle ear abnormalities.

c. Audiometric testing must be performed by, or under the direct supervision of, a licensed audiologist or an otolaryngologist.

2. What audiometric testing do we need when you do not have a cochlear implant?

a. We generally need pure tone air conduction and bone conduction testing, speech reception threshold (SRT) testing (also referred to as “spondee threshold” or “ST”‘ testing), and word recognition testing (also referred to as “word discrimination” or “speech discrimination” testing). This testing must be conducted in a sound-treated booth or room and must be in accordance with the most recently published standards of the American National Standards Institute (ANSI). Each ear must be tested separately.

d. The SRT is the minimum dB level required for you to recognize 50 percent of the words on a standard list of spondee words. (Spondee words are two-syllable words that have equal stress on each syllable.) The SRT is usually within 10 dB of the average pure tone air conduction hearing thresholds at 500, 1000, and 2000 Hz. If the SRT is not within 10 dB of the average pure tone air conduction threshold, the reason for the discrepancy must be documented. If we cannot determine that there is a medical basis for the discrepancy, we will not use the results of the testing to determine whether your hearing loss meets a listing.

e. Word recognition testing determines your ability to recognize a standardized list of phonetically balanced monosyllabic words in the absence of any visual cues. This testing must be performed in quiet. The list may be recorded or presented live, but in either case the words should be presented at a level of amplification that will measure your maximum ability to discriminate words, usually 35 to 40 dB above your SRT. However, the amplification level used in the testing must be medically appropriate, and you must be able to tolerate it. If you cannot be tested at 35 to 40 dB above your SRT, the person who performs the test should report your word recognition testing score at your highest comfortable level of amplification.

3.What audiometric testing do we need when you have a cochlear implant?

a. If you have a cochlear implant, we will consider you to be disabled until 1 year after initial implantation.

b. After that period, we need word recognition testing performed with any version of the Hearing in Noise Test (HINT) to determine whether your impairment meets 2.11B. This testing must be conducted in quiet in a sound field. Your implant must be functioning properly and adjusted to your normal settings. The sentences should be presented at 60 dB HL (Hearing Level) and without any visual cues.

4.How do we evaluate your word recognition ability if you are not fluent in English?

C. How do we evaluate vertigo associated with disturbances of labyrinthine-vestibular function, including Ménière’s disease?

1. Vertigo associated with disturbances of labyrinthine-vestibular function, including Ménière’s disease. These disturbances of balance are characterized by a hallucination of motion or a loss of position sense and a sensation of dizziness which may be constant or may occur in paroxysmal attacks.  Nausea, vomiting, ataxia, and incapacitation are frequently observed, particularly during the acute attack.  It is important to differentiate the report of rotary vertigo from that of “dizziness” which is described as light-headedness, unsteadiness, confusion, or syncope.

2. Ménière’s disease is characterized by paroxysmal attacks of vertigo, tinnitus, and fluctuating hearing loss.  Remissions are unpredictable and irregular, but may be long-lasting; hence, the severity of impairment is best determined after prolonged observation and serial reexaminations.

3. The diagnosis of a vestibular disorder requires a comprehensive neuro-otolaryngologic examination with a detailed description of the vertiginous episodes, including notation of frequency, severity, and duration of the attacks.  Pure tone and speech audiometry with the appropriate special examinations, such as Bekesy audiometry, are necessary.  Vestibular function is accessed by positional and caloric testing, preferably by electronystagmography.  When polytomograms, contrast radiography, or other special tests have been performed, copies of the reports of these tests should be obtained in addition to appropriate medically acceptable imaging reports of the skull and temporal bone.  Medically acceptable imaging includes, but is not limited to, x-ray imaging, computerized axial tomography (CAT scan) or magnetic resonance imaging (MRI), with or without contrast material, myelography, and radiocnuclear bone scans.  “Appropriate” means that the technique used is the proper one to support the evaluation and diagnosis of the impairment. .

In evaluating the loss of speech, the ability to produce speech by any means includes the use of mechanical or electronic devices that improve voice or articulation.  Impairments of speech may also be evaluated under the body system for the underlying disorder, such as neurological disorders, 11.00ff.

E. How Do We Evaluate Impairments That Do Not Meet One Of The Special Senses And Speech Listings?

2. If you have a medically determinable impairment(s) that does not meet a listing, we will determine whether the impairment(s) medically equals a listing.  (See §§404.1526 and 416.926.)  If you have an impairment(s) that does not meet or medically equal a listing, you may or may not have the residual functional capacity to engage in substantial gainful activity.  Therefore, we proceed to the fourth, and if necessary, the fifth steps of the sequential evaluation process in §§404.1520 and 416.920.  When we decide whether you continue to be disabled, we use the rules in §§404.1594, 416.994, or 416.994a, as appropriate.[/vc_column_text][/vc_tta_section][vc_tta_section title=”2.01 Category of Impairments, Special Senses and Speech” tab_id=”2-01-category-of-impairments-special-senses-speech”][vc_column_text]

Remaining vision in the better eye after best correction is 20/200 or less.

2.03    Contraction of the visual field in the better eye, with:

A. The widest diameter subtending an angle around the point of fixation no greater than 20 degrees;
OR

B. An MD of 22 decibels or greater, determined by automated static threshold perimetry that measures the central 30 degrees of the visual field (see 2.00A6d).

2.04  Loss of visual efficiency, or visual impairment, in the better eye:

A. A visual efficiency percentage of 20 or less after best correction (see 2.00A7d).

2.07      Disturbance of labyrinthine-vestibular function (Including Ménière’s disease), characterized by a history of frequent attacks of balance disturbance, tinnitus, and progressive loss of hearing.  With both A and B:

A.  Disturbed function of vestibular labyrinth demonstrated by caloric or other vestibular tests; and

B.  Hearing loss established by audiometry.

2.09    Loss of speech due to any cause, with inability to produce by any means speech that can be heard, understood, or sustained.

B.  A word recognition score of 40 percent or less in the better ear determined using a standardized list of phonetically balanced monosyllabic words (see 2.00B2e).

A.  Consider under a disability for 1 year after initial implantation.

B.  If more than 1 year after initial implantation, a word recognition score of 60 percent or less determined using the HINT (see 2.00B3b).